MP for Surrey Heath
Michael Gove was born in Edinburgh in 1967 and brought up in Aberdeen. Educated in England and Scotland, in the state and independent sectors, he is passionately committed to raising standards in state schools and helping children from less privileged backgrounds to maximise their potential.

Michael is married to Sarah Vine, who is a columnist at The Daily Mail, and they have one daughter, Beatrice, and a son, William, who was born at Frimley Park Hospital in November 2004.

Michael has been a journalist since he left university, working for local and national newspapers, radio and TV. He has reported on issues as diverse as EU corruption in Brussels and the threat to small businesses from red tape as well as championing the victims of crime.

At The Times, Michael worked closely with Frances Lawrence, widow of the murdered headmaster Philip Lawrence, to fight street crime and its causes. Frances's campaign succeeded in establishing an award scheme for good citizenship among the young and influencing legislation to ban combat knives.

Michael has also appeared regularly on radio and television, as a panellist on Radio Four's "The Moral Maze" and BBC 2's "Newsnight Review" and a guest on Channel Four News, Any Questions and Question Time. He has appeared in one feature film. He played the school chaplain in the family comedy "A Feast at Midnight" which was released in 1995.

Michael is a former Chairman of Policy Exchange, a centre-right think-tank which has come up with innovative policies on policing, local government and fighting terrorism. Policy Exchange's plans to devolve more power over police priorities to local communities has been widely welcomed and compared to the initiatives introduced by Rudi Giuliani which reduced crime in New York.

He took a prominent role in the successful campaign to leave the European Union, as Co-Convenor of the Vote Leave campaign committee.  After leaving government in July 2016, Michael helped found Change Britain and served as Vice Chair of the Select Committee on Exiting the European Union.  He also returned to The Times to write a weekly column.

Following the 2017 General Election, Michael was appointed as Secretary of State for Environment, Food and Rural Affairs. On 24 July 2019, he was appointed as Chancellor of the Duchy of Lancaster.

On 12th December 2019, Michael was re-elected the MP for Surrey Heath.

Michael Gove has received the following email from Andy Mellors, Managing Director of South Western Railway, regarding the rail services between Reading and Ascot (via Camberley and Ascot) and London Waterloo:

Tesco no longer plans to open controversial store in Lightwater

Michael Gove, MP for Surrey Heath, was informed last Thursday that Tesco no longer plans to open a new Express store in Lightwater.

Tesco had originally applied in 2010 to build a store on the Guildford Road site, a plan which was met with much opposition from local residents. 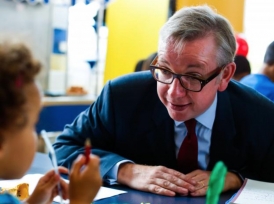